EXCLUSIVELY at ARGUMENTUM, we “ dot the Is” and “cross the Ts” only in 1000 words on 4 major events by the well-known diplomat and analyst

1. Nothing new from Brussels! The 11th Meeting of the Stabilization& Association Council ( SAC) held on 1st of March in Brussels gave the oportunity to Prime Minister Rama and FM Xhaçka to meet the “ big shots” of the EU. As expected, SAC commended the reforms, the aligment of our foreing policy with the EU and other achievements. Meanwhile, its basic and reference document gave a diplomatic “ NO” to the attacks, stings and insinuations by PM Rama which were repeated also in Brussels although with much softer tones; the Final Statement proves with facts and figures the EU generosity with aids, funding and projects for the region and Albania, in particular, ranging from the funding for the earthquake, investments to vaccines for COVID - 19.

But in real terms, there was no news, not even an appeal to EU Member States to fix a date for the opening of the Accession Negotiations. Simply “ expectations to start them as soon as possible” but “in compliance with the Council Conclusions of March 2020”; clearly implying the 15 conditions, emphazising Decriminalization, and without mentioning even “between the lines” if we are closer. This is natural, not ony given the SAC nature, but mainly since everyone now is focussed on 25 April, as the “ Principal Condition” for opening the negotiations; certainly, if they would comply with OSCE standards and their result be accepted by all; this defining point was also emphasized in the Joint Press Conference Borrell - Varhelyi - Rama. The latter did again “ tread in rotten plank” when he emphasized that the EU Commission is the “’ highest technical evaluation mechanism” but surprisingly enough did not mention the European Parliament, the Council and notably the Member States, as the top political decision-makers for the opening of negotiations. Likewise, he did again overpass his “ own territory” when quite unnecessarily dwelled on the disaccords between North Macedonia and Bulgaria, as if he is a EU spokesman!

2. “ Scapegoat” for negotiations! This sentiment of “ victimizing” others, considering our own job as completed is felt when one hears about the virtual talks of FM Mrs. Xhaçka in the last two weeks with her counterparts and by PM Rama himself, including his press remarks in Brussels on 1 March. True, as it is noted in the previous issue of Realpolitik, whether, how and to what extent we have performed our homework and complied wth the relevant conditions, this is evaluated in technical terms by the EU Commission; yet, it is only the EU Council, i.e. all its 27 Member States that judge and decide in final political terms. As to us, we are only “ players” and “ beggars” so we just need to say to them “ here is our homework and the completed conditions, we trust on you and thanks for your support.!” But not become judges and tell them “ what are you waiting for, why don’t you “blow the whistle”! Neither should we try to make diversion among the European Commisson, Parliament and Council or even worse to show our telling finger to the Netherlands and its elections, which allegedly impede the start of negotiations. This is wrong, since even after these elections, the concern would remain there, mitigated or aggravated, as the case could be. Well, the concern is indeed in the Hague, Paris or elsewhere, but its cause and source remains in Tirana. Besides, there would be elections also in France, Germany and elsewhere. Then, what is going to happen with our negotiations? 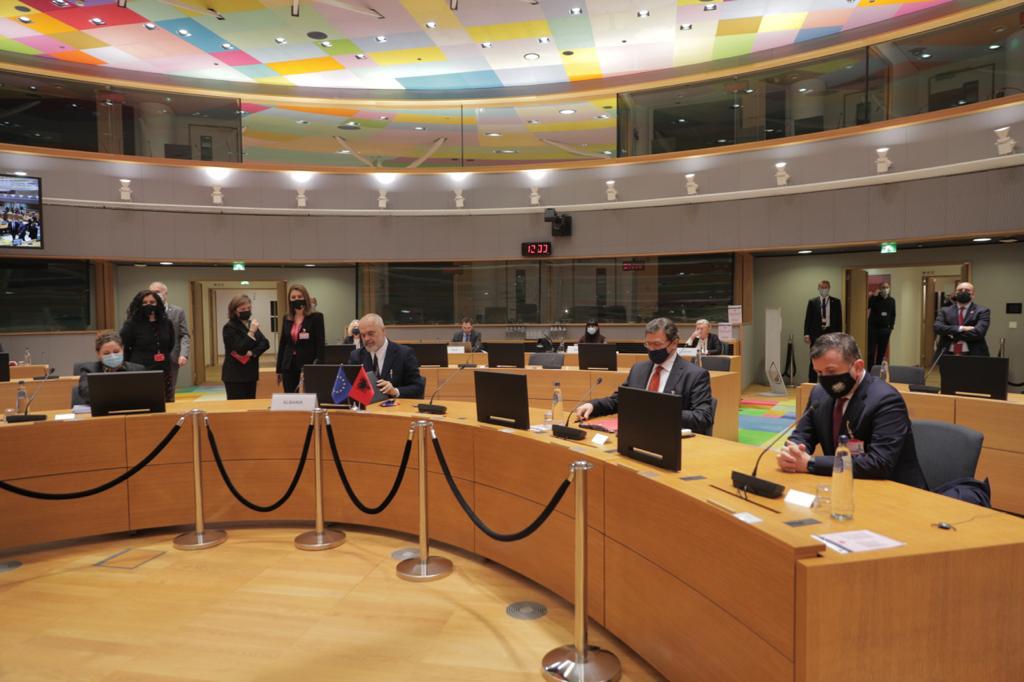 This is why, after Brussels, they should travel to the Hague, Paris, Berlin and elsewhere. No mistake, the “ therapy” is not to find “scapegoats” for the delayed negotiations, but to change the approach, with positive, cooperation and mobilization attitudes vis à vis each single EU Member State. And don’t forget, “ the ball is in our court and we have to kick it out” Otherwise, we shall prove the wise Albanian saying “ The pan on the fire, the fish in the sea”. In that case, we shall have negotiators but what for without negotiations?

3. A step not a stride! This refers to the two meetings of the DP leader, Lulzim Basha in Ljubljana and Zagreb with the Slovenian and Croatian Prime Ministers. Well, it was only a STEP, but not a STRIDE as some claim. There is no room for euphoria, as if the opposition has taken the whole EU on its side! True, it was a good thing that Basha went and introduced there the program of the possible upcoming government; moreover, since Slovenia will have the EU rotating Presidency this year.

Even more, now that they signed the post- electoral coalition deal, Basha&Kryemadhi should continue their “ flash” tours and meetings especially in Brussels, Paris, Berlin, Rome and even in Washington, in view of regaining the international confidence and support for 25 April. However, these sorts of meetings and tours have become a routine in Europe. Therefore, one should not take them for granted as an exclusive support for the opposition. Please do not confuse the diplomatic courtesy and procedures with Real Politik.

4. Balsam&Unity! This is the picture of the first 50 days of Biden Presidency. “Balsam” because the political situations is calm; the country has escaped from the daily Trump tweets, the tongue of hatred, divisions, violence……The new Administration is committed to with effective projects and programs against COVID - 19 and launching positive messages towards the US and foreign citizens. Diplomacy is back to its own role. With its neighbours, the construction of the Wall with Mexico is stopped and the partnership with Canada is reconfimed. The USA is returning to WHO and all other international treaties and organizations; they extended the validity for the nuclear deal “ Start” with Moscow and so on. Most importantly, Biden&Blinken have sent messages of partnership and cooperation to the EU and NATO.

They have recognized the EU facilitating role in the dialogue between Belgrade and Pristina and in their cooperation in Western Balkans, by and large. In their communications with the leaders of great states, particularly with China and Russia, apart from the critical stances on well-known issues, they have also identified common areas of cooperation. They confirmed these messages also during the video-calls and conferences on the occasion of the Security Conference of Munchen and G - 7. Another major message by Biden is the stregthening of democracy, so that it would not be “ a relics of the past”, but it will serve to meet the serious challenges and win over adversaries. In brief, the situation now is everywhere “ as day with night” compared to three months ago. So, it has not turned its first 100 days yet, what do one needs more to consider Presidence Biden as “ balsam” trust and unity in diversity.