With an unofficial turnout of 48.2 percent, the highest in the last decade, Albania closed the voting process in the tenth parliamentary elections on Sunday evening after a campaign marred by unrest that broke out last Wednesday between supporters of rival parties in the city of Elbasan, which led to the death of Pjerin Xhuvani, a former director of the regional health insurance fund, who had been convicted for corruption, while four others were injured.

Initial exit polls data released after the last polling stations closed in a calm atmosphere suggest that the ruling Socialist Party (SP) is in a tight race with the opposition Democratic Party (DP) and Socialist Movement for Integration (SMI) whose leaders declared insistently their candidates would win up to 90 MPs. PM Edi Rama was cautious declaring victory without the usual euphoria eying 74 safe parliamentary seats.

As counting is over in 1,203 voting centers out of a total of 5,199 across this Balkan country the rose colour, Socialist symbol, is dominant with some northernmost regions in blue representing the DP.

According to unofficial results of CEC on Monday morning SP leads with over 50% in 8 regions in central and southern Albania except Korça where it is with 48%, while it is the most dominant in Durrës and Vlora where it has over 67 and 61% of votes.

After projecting the Socialist Party as the sure winner of the elections in Tirana with a margin of 75 to 77 deputies across the country, Prime Minister Edi Rama who seems to have been waiting for dawn posted a photo of the sunrise over Tirana in social networks on Monday. "What a dawn in Tirana," wrote Rama.

In the meantime in an unprecedented development PSD Chairman Tom Doshi announced early Monday morning his double resignation from the mandate as an MP and his candidacy in the April 25 elections.

Doshi in the letter addressed to the CEC writes that the decision is irrevocable and seeks to replace his mandate with another.

Doshi has been a target of harsh accusations by US Ambassador Yuri Kim demanding local authorities not to allow him to take part in election. PM Rama has assured Kim that if he won Doshi would not be part of the new ruling majority.

As PSD is projected to win 2 to 3 deputies Doshi surrendered to US threats paving the way to his party, which he  bought from Skender Gjinushi as the latter became Head of the Academy of Sciences of Albania, to join SP in eventual post electoral coalition.

Earlier on Sunday DP Head Basha has accused the incumbent Socialist Party of vote-rigging, corruption, and links to organised crime but Rama kept high the morale of his militants assuring of securing a third term after his two previous victories in 2013 and 2009. He has promised to promote tourism, agriculture, and energy projects and conclude the mass vaccination of the people against the pandemic.

US Ambassador Kim and other top diplomats in Albania, mainly from EU member countries, criss crossed the county visiting polling stations. After the end of voting, Kim wrote on Twitter at 1.37 am on Monday:

"Counting procees has begun for Albania election. With KQZ's Ilir Celibashi, I visited the counting centers at Vasil Shanto and Shkolla e Kuqe. Pune te mbare and flm to all counters and staff working through the night. Let's all patiently await the results. US will be with you to the end!" 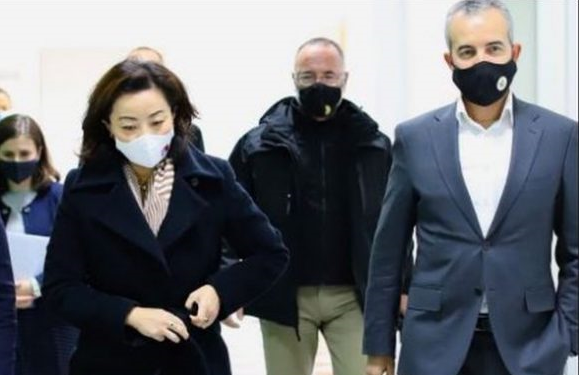 The Ambassador of Croatia, Zlatko Kramaric was in Kruja and said on Sunday that "in the region of Kruja everything goes smoothly with minor technical problems and non-compliance covid measures."

The Central Election Commission is expected to declare a winner based on final results in the next 48 hours. /argumentum.al