"It is good news that we will soon have a new border crossing point between Albania and Montenegro to further facilitate the movement of people and goods," said the Minister of Interior, Bledi Çuçi, who together with the Minister of Justice, Etilda Gjonaj held a meeting on Thursday with the Deputy Prime Minister of Montenegro, Dritan Abazovic, who is paying an official visit to Tirana.

Çuçi and Gjonaj discussed with the Montenegrin official, who is of Albanian origin,  various issues related to security and strengthening cooperation between the two countries.

"Together with the Minister of Justice, we had a meeting and a working lunch in Tirana today with the Deputy Prime Minister of Montenegro, Dritan Abazovic, who is also a young and ambitious politician from the ranks of Albanians in the neighboring country. We discussed the increase of cooperation in the field of security, the control of the Albania-Montenegro border, joint police actions against trafficking and organized crime, as well as monitoring the situation during the tourist season because it is known that there is an increased influx of people from the two countries," stressed Çuçi. 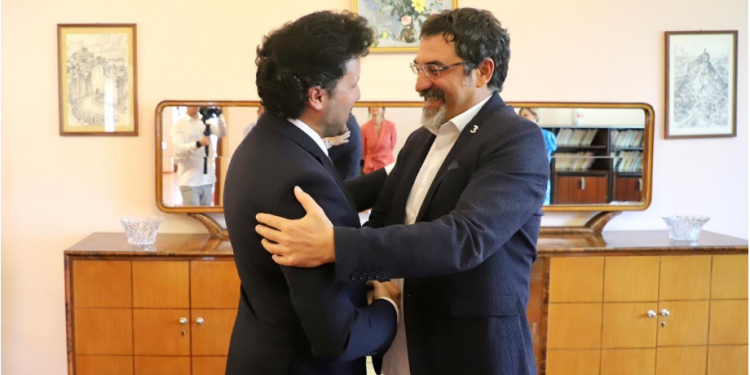 According to him, the two countries still have an underutilized area of cooperation. “I believe it is a good premise the visit for the first time of a high representative of the Montenegrin government from the ranks of Albanians to further intensify cooperation between the two countries and our peoples, as well as to solve different problems inherited from the past or newly created,” said Albanian minister.

After a separate meeting with Abazovic on Thursday, the leader of the opposition Democratic Party (DP), Lulzim Basha, said in a joint news conference that the topics of discussion were democracy and regional issues and the joint objectives which are the economic development and the European integration of the two countries.

Abazovic stated that, "we talked about concrete things, challenges, which we had in Montenegro before this change came, challenges which are more or less the same. We need to adapt more to European norms to be sure that what we promote we want and actually achieve."

Further on he said he believed that the time is for a new European spirit in all the territories. According to him, institutions are not very functional and need more ethics in political life in ted y countries. / Argumentum.al