A mega operation against a major Albanian-Italian drug trafficking network has resulted in its dismantling and about 38 members of that organised criminal group (OCG) responsible for international trafficking of large quantities of drugs have been arrested in Albania and Italy. According to an official news release on Thursday, 3.5 tonnes of marijuana, cocaine and hashish have been seized, with an estimated street value of more than 40 million euros. A variety of goods and assets in Albania were also seized, with a value of over 4 million euros.

The Special Anti-Corruption and Organised Crime Prosecutor's Office of Tirana (SPAK) and the Albanian Police concluded the operation In Albania, while the operation was carried out in Italy by the Anti-Mafia Investigative Direction of Bari, with the cooperation of Carabinieri, Polizia di Stato, Guardia di Finanza, under the direction of the Anti-Mafia Prosecutor's Office of Bari (DDA of Bari).

The relevant bodies in both countries have had the fundamental and constant support from the Hague-based Eurojust.

The Italian Antimafia and Counterterrorism Directorate (DNA) and Eurojust, ensured proper coordination of investigations, at national level and international level respectively. The suspects, of Italian and Albanian origin, were part of a powerful criminal organization trafficking drugs from Albania to Italy and had been very active on the drug market for a long period. They had been smuggling large quantities of drugs using leisure boats, subsequently transporting them overland mainly to the Bari, Puglia and Basilicata regions.

Thursday’s final action day, coordinated by Eurojust, resulted in the simultaneous arrest of 38 suspects in Italy and Albania, while other measures are being executed in France, Montenegro and Spain. The investigation allowed the seizure of 3.5 tonnes of drugs (marijuana, cocaine and hashish), the equivalent of about 7 million individual doses worth 40 million euros. Various assets were seized as well in Albania, including a coffee production and trading factory, a drinks and alcohol distribution company, a food business, a restaurant, 15 apartments, a building plot, as well as 7 large cars and a boat equipped with powerful outboard motors. Assets were seized in Vlora, Kavaja, Tirana and other cities, said official Albanian sources. 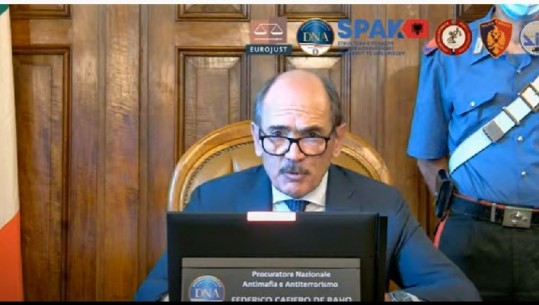 This outstanding investigative result with simultaneous execution of this cross-border operation was made possible thanks to the Joint Investigation Team between the Albanian and Italian authorities, whose agreement represents a model for the cooperation between Albanian and EU judicial authorities, said a statement released by Eurojust.

Joint investigation teams (JIT), established in 2017 and benefited from financial and analytical support from Eurojust, are law enforcement and judicial teams set up jointly by EU national investigative agencies to handle cross-border crime. Joint investigation teams coordinate the investigations and prosecutions conducted in parallel by several countries. This facilitated a quick and direct exchange of information among the authorities involved, who set to work as one team.

It enabled in-depth investigations into the criminal activity, mapping out its operations and network, both in Albania and in Italy.

Thursday’s action is the culmination of long-lasting criminal proceedings in Albania and in Italy where several suspects - one part of the criminal group - had already been convicted in the Court of First Instance in Italy in 2019.

In Albania, there are police officers and prosecutors who were detained in this international operation. Local media reported on Friday that prosecutor of Vlora Maksim Sota was among the detainees as well as the former deputy commissar of Fier Police Directorate Festim Lelaj.  Sota was a candidate to join the team of SPAK being interviewed in 2019 but was disqualified.

One of the prosecutors involved in the operation Vladimir Mara was quoted by BalkanWeb as saying on Friday that 6 tons of cannabis, heroin and cocaine were seized. In the meantime, he released the news that the security measure was ordered for more than 80 persons and 4 judicial employees are among them under the charge of providing important information to the criminals. / argumentum.al