The National Assembly of the Democratic Party (DP) initiated by former Prime Minister Sali Berisha, which held its  deliberations on Saturday as scheduled, marked a historic day on the anniversary of its founding to re-establish it on the ideals and principles on which it was based in December '90 but to place it on the rails of Conservatism.

This was the motto of the speeches of many delegates in the Assembly which was held as an extraordinary event after 31 years.

This day will go down in the history of the Democratic Party. "After 31 years, we come together once again as the crisis that exists within the DP is due to repeated failures in the elections," the Chairman of the National Council of DP, Edi Paloka said presiding over the deliberations of the meeting.

Belind Këlliçi, the chairman of the commission of the National Assembly of the Democratic Party said that 4934 delegates were present at that forum. Also, according to him, 4200 signatories who submitted the forms for the meeting of the Assembly were present.

Based on these data, Këlliçi stated that the DP Assembly is legal and has the right quorum. The member of the DP leadership, Oerd Bylykbashi, also presented the proposals for changes in the statute of the Party, which were put to a vote.

MP Bylykbashi said that the logo and seal of the Democratic Party will be changed, while the chairman is fired at the moment he loses the elections.

Albanian activist in the US, Evi Kokalari, speaking in the DP Assembly, said that the DP will start the path of a conservative party from today.

‘The American Constitution was signed by 56 statesmen who swore to sacrifice their lives to give full freedom to American citizens. Their courage created a nation in the universal demand for human dignity. This is the dignity that Mr. Berisha demands. Today is the end of the opposition DP and the beginning of the conservative DP and as such we are baptizing it in this stadium," said Kokalari.

Afterwards the Assembly established the Commission on the refoundation of DP.

Among other decisions adopted by the Assembly in a secret ballot was the question: "Do you agree with the dismissal of DP chairman Lulzim Basha?"

Out of  4491 delegates who took part in the voting process in the Assembly 4446 voted in favor of the dismissal of Basha to 36 delegates, while 9 ballots were invalid.

The decision made by the National Assembly will be voted in a referendum of all the DP membership on December 18, 2021.

Meanwhile, the assassinated DP founder, Azem Hajdari was declared by the Assembly as honorary chairman of the Democratic Party.

In his speech, the veteran DP leader, Sali Berisha stated that the current head of the Party, Lulzim Basha, has betrayed the vote of the Democrats. He stressed that "in 8 years we ended up as a political force that did not see any victory. The Democratic Party already resembled a dry tree that does not green even in summer and never. After the 2021 elections, when the Democratic Party declared an electoral massacre, they were like that, but they remained orphans, the vote of the Albanians remained an orphan."

Berisha said that Basha took care of his chair first of all and decided to turn the DP into an opposition facade, an appendix of the narco-state.

"He surrendered his sovereignty to save his own head. He had no character to resign. After that he further violated the statute, installed anti-democratic forums, expelled leaders from the forums and attacked partners like FRPD and LDG. In 8 years Basha moved the party of conservative values ​​to the left and only to the left. He narrowed the space for the politically persecuted, for the former owners," he said.

Further, Berisha said that the narcotics state with huge money and its phalanges acted against the opposition with all the support of the 'chairman held hostage' and the government, but "sadly we faced an unprecedented, brutal intervention of diplomats and officials from a friendly country, USA."

US Ambassador Yuri Kim is not behaving like the US representative in Albania, but as the former Soviet Union ambassador in Tirana many years ago, Berisha said in his speech at the Assembly.

"I want to emphasize and tell these officials that we are an old nation. In our history few more than us have had to do with the superpowers of the times, from antiquity to the present day. The Soviet Union, as described by the President Reagan, was the emperor of evil, it was the superpower of totalitarianism and human degradation of misery, violence, terror, and against it is the USA, the emperor of freedom, of values, the great country of freedom. It's sad and painful to see the US ambassador behave like a governor just like the former Soviet ambassador to Tirana," Berisha said.

In the meantime Berisha told the enthusiastic participants who chanted slogans like "Rama go!", "Down with Basha!" and "Berisha, Berisha!" that his battle for dignity will never stop. 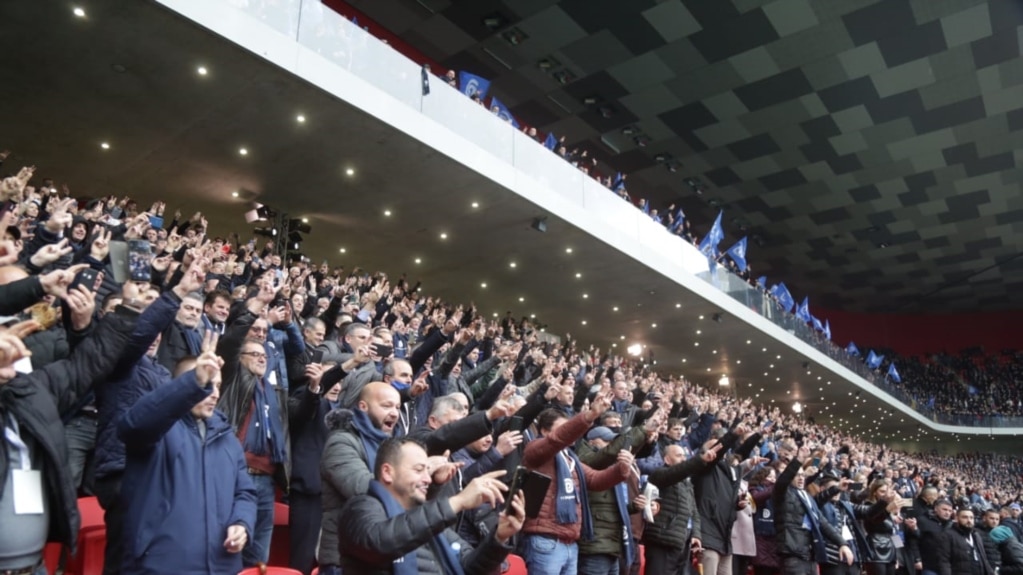 "I invite US State Department officials to reconsider their decision, because arrogance and error are not virtues of free people," said Berisha, touching upon his designation as persona non grata by US State Secretary Anthony Blinken.

Berisha has filed a lawsuit against Blinken with a French court which has accepted to consider the case.

But there were sporadic voices against the procedures of the Assembly. So the former candidate for chairman of the Democratic Party, Ibsen Elezi has expressed criticism of the National Assembly held in "Air Albania" called by former Prime Minister Sali Berisha. He focused on the establishment of the DP Re-establishment Commission and the list of 29 names in its composition that will take over the leadership of the party. Elezi stated from the rostrum of the National Assembly, that the selection of these names had to be done through a voting process.

"You can find Sorosians and anti-sorosians in the list of 29 names. I know 5 or 6. I find state security spies. You also find honest men. Where does this conglomerate come from, where are the election filters and who took responsibility for this election?" he said.