The recruitment campaign is going on in other cities of Albania besides its capital Tirana, and Defense Minister Niko Peleshi took the opportunity of such an event in Korca, southeastern of the country, to launch a call on the youth to respond to the appeal on Monday.

Earlier Peleshi was in Elbasan where he attended this process from where he also invited young people to consider this one of the best opportunities for their career.

The recruitment campaign will run until January 20th.

"We want to invite not only in the sense of the patriotic feeling young people to become part of the Armed Forces, but we also take on our responsibilities to give as much dignity to this position. To be a member of the Armed Forces is an honor, a great pride, because it represents all the strength of the nation, it represents a country that is a member of NATO," said Peleshi.

In addition the minister announced that all those young people who will become part of the Armed Forces as a result of this recruitment process will be evaluated by a salary system that is among the highest in the region. 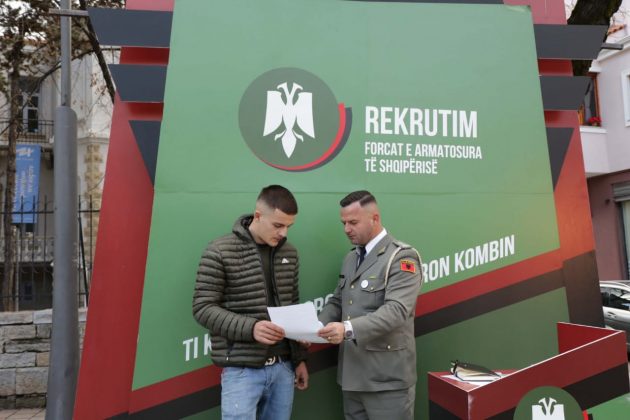 While reiterating the invitation to young men and women he stressed that the FA creates great career space.

"I have an invitation to young men and women to consider it realistically, not because that's my position to say, but because really starting a career in the FA is an incomparable opportunity with many other careers, because first you start with a salary of over 50,000 leks, over 500,000 ‘old leks’, said simply regardless of the education you have,” he said.

In conclusion Peleshi underlined that if youth have higher education, wide doors are opened through courses in NATO countries. Also, in Albania in the Academy of the Armed Forces you can grow in your career, you can even reach the highest ranks. / Argumentum.al